Bruce writes, “We are the second largest tropical country, after Brazil, and owe it to the world to fully exploit and responsibly develop our tropical location.”

Bruce writes about the importance of mangroves as food. Having used the word “mangrove” in the “Where does it grow?” field in the Food Plants International database Bruce could identify about 140 edible plant species that grow in mangroves.

“I try to vary the talks to suit the target audience but it always has a common theme of using the amazing diversity of food plant resources to feed a hungry and malnourished world.”
The ecojesuits in Zambia and the International Panel on Sustainable Food Systems have both written thoughtful and insightful papers on food production.

1.2 billion people who do not have access to electricity; 775 million adults who can’t read; nutritionists dealing with under-nutrition talking about the first 1,000 days of a baby’s life; finding ways to get Food Plants International information out to these people

The International Society of Horticultural Science gave out a wonderful pamphlet at a recent conference Bruce attended. They showed how most of these incredible lists of other chemicals in food plants are often linked with the colour of the food.

The fig family is another very large family only now getting sorted out botanically. There are 882 recognised species, of which 238 have been recorded as edible.

The ginger family of plants is a fascinating group of plants. The Food Plants International database has 234 species that are edible.
Photographs and a list of the Zingiberaceae family.
Places mentioned: Kerala University Botanical Gardens in southern India; Queen Sirikit Botanical Gardens in Chiang Mai in northern Thailand

Bruce discusses edible ferns which can make up a significant and attractive part of people’s diets.

Bruce writes an overview of his 50 years’ interest in edible plants.

Bruce discusses the many food plant databases available. Neglected and underutilised food plants have the potential of restoring agriculture and making useful contribution towards feeding the world. 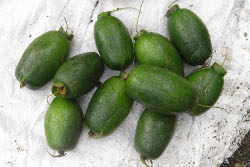